I just read that Scott Roeder was found guilty of first degree murder in the killing of abortion doctor George Tiller. I also read in News Week there are some in the pro life community that hail Scott Roeder as an American Hero. Really? I Don't think so.

This is what I wonder, how can you justify a life for a life? He took a life in order to save a life, how is that morally ok? Who is gets to decide one life is worth more than another? He thinks Tiller is a murderer, what does that make him? Explain that to his wife and children that his life is worth less? And the woman who Dr. Tiller would be treating, will just have to travel farther, pay more but in the end, the will have their abortion so did Mr. Roeder really do anything other than kill a man in the name of murder.

Incidentally, I am pro life. As an adopted child from the late 60's I am thankful my birth mom chose to give me life and let me go. I do not judge nor have I ever been in a position where I had a decision to make about the fate of an unborn child. It has to be an excruciating choice.

Please, don't hate. This is just my little corner to say my thing. And I think there is a place to agree to disagree. But make no mistake, Scott Roeder is NO American hero, he is a murderer.

It could be fair to say I am not a great friend. I have a hard time maintaining relationships with women. Partly because I don't have kids, I lack that one big relational thing that 99% of women do. Now don't get me wrong, I love my friends kids. I ask about them, we talk about them I am invested in many of their lives. Yet that particular connection of pregnancy, child rearing etc. is not there. Most of the time women wear me out. Or should I say women who use me as a dumping ground for their stuff wear me out. I can no longer do it and I avoid those friends who are dumpers. A vent now and again, hey I do that too but dumpers... no thanks! And a big group of women gives me the hebejebes. All chatty and..whatever. I feel like I just don't fit, so I don't. I have even gone to church retreats and thought, what am I doing here with all these ladies..hmm.

So Imagine my surprise when I felt led to host a bridal shower for my dearest friends daughter! It will be most likely a large affair, and hopefully I can pull it off. I can organize pretty well, my friend and the bride will have a tremendous amount of input. But I can't believe I did it, this is WAY outside my comfort zone and I will have all these ladies to deal with...Yikes. Just not my cup of tea. But for my friend it will be worth it. She has been the best, easiest, least work of any friendship I have had in all my years. She is loyal and true and so is her daughter. So I am going to suck it up for two of the most awesome ladies I have ever met. I am sure I will learn something about myself it the process. And maybe I will find some new way to relate to and enjoy the company of women.

Ok, So Sandy at Say What and Tracy at COFB both nice enough to pass along my first award to me..Does it count as two? lol. Thanks ladies, very sweet of you♥

1. I remember birth dates, anniversaries, kids birthdays of nearly everyone I know even kids from elementary school.

2. The best job I have ever had was teaching swimming lessons when I was a teenager. Only had 1 kid out of easily 100's of kids I taught that I could never get to pick it up.

3. I drive a forklift at work very regularly and stun most of the male truck drivers. Chauvinists!

4. Part of me wishes we had never returned to California from Oregon. I miss the river fishing and hunting with my husband.

5. I am still learning that I need to think before I speak. And sometimes, to not say anything at all is really is the best answer.

5.1 It took me 30 minutes to figure out how the bloody hell add the photo at the top of the post. Yeah I am a little slow at this blog stuff.

5.2 Because no one IRL knows that I have a blog, I think everyone I know at fellowship has been tagged for this, but here is two that I did not see. So with that, I pass this award on to these two lovelies!

Jeannette at And on today
Posted by suz at 2:06 PM 1 comment: 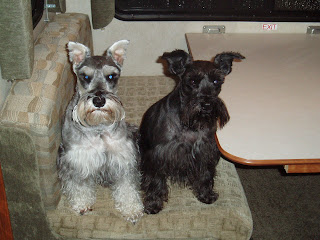 My youngest fur kid is 5 today. Sparky, he is the salt and pepper one on the left. I thought he would not make it past one! He chewed and chewed and destroyed to the point I could have killed him! I would say he is in to me 10,000 dollars in damage between the carpet, the chairs and the furniture! Boy that was a hard first year! He has turned out to be such a good boy.
He is definitely the breed standard. Playful, smart, loud and has his own yodel language to greet me when I come home. He is always happy see me. He knows the names of his toys and goes and gets them if you call them by name. His favorite is Bob, a wiener dog toy that squeaks. He loves to be in my lap at all times. He is mama's boy for sure!
I know pets are not people, but this little pet has been a joy and a fun part of my life. So happy birthday little buddy, there will be presents and ice tonight after diner! lol...
Posted by suz at 1:50 PM 1 comment: